The Downtown Magnetawan T-Shirt first appeared at Jack's General Store in 1973. The design was conceived by the proprietors Jack and Myra Viner who had purchased J.W. Troyer's store from Adam Schneider in late 1966 or early '67. Originally only available as tee-shirts the line was expanded to include sweat shirts and hoodies by Herb and Helen Watson and their Daughter and Son-in-Law Dawn and Geoff Scott who purchased the business from the Viners about 1978-79. At this time the name was changed to The Downtown General Store.

Tony and Sue Han bought the store from the Scott's and had the Downtown Magnetawan logo trademarked and continued to sell the now famous shirts up until the August long week-end 2011  when the store was lost to fire along with the Magnetawan Inn. Over the years, the general store stared displaying people's pictures wearing their shirts in exotic places all over the world. There was even a picture of President and First Lady Carter sporting their very own Downtown Magnetawan shirts. All were lost in the fire.

Four years four months later the trademark was purchased and Craig and Jennifer Mayhew along with Alan and Brenda Fraser and "Downtown Magnetawan Apparel" was born. The now famous shirts were put back into production. The "Downtown Magnetawan"  line includes t shirts, sweat shirts, hoodies, hats and tank tops. The line will continue to grow and expand.

They can now be purchased from their new home in downtown Magnetawan at Home Hardware where the picture wall has started to be rebuilt. If you have pictures of you in your favorite shirt we encourage you to drop it off at Magnetawan Home Hardware to be hung on the wall.

Here is a link to an excellent article about our brand:
(Click Here) 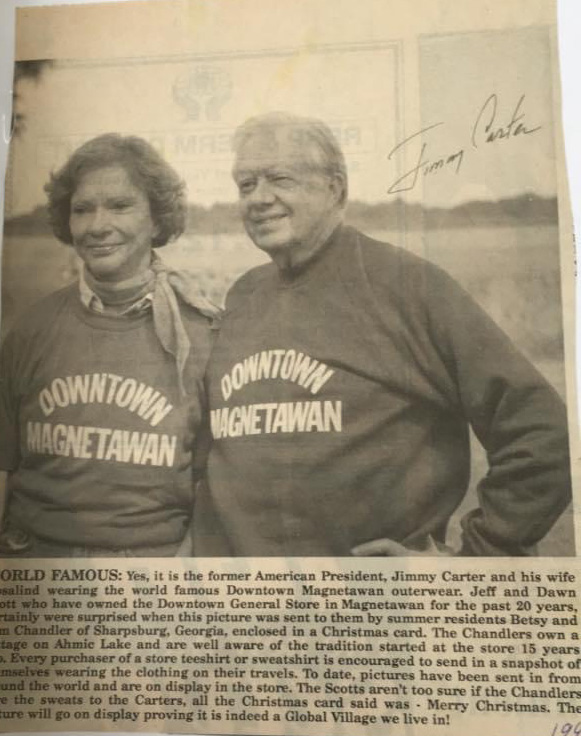